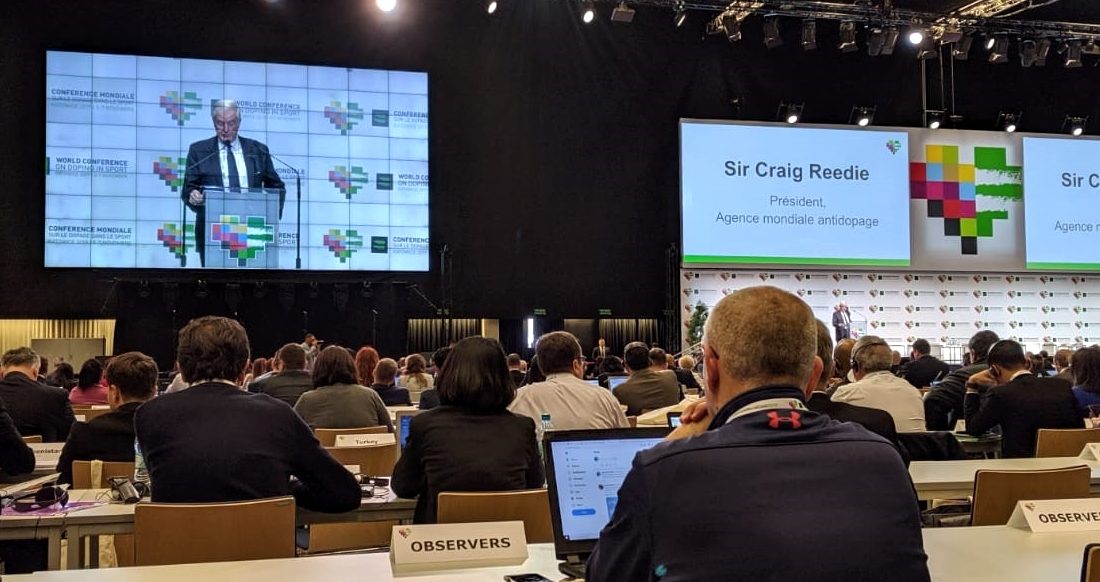 As ambassador for the Versapak Doping Control ltd team, I accompanied them to the 5th WADA World Doping in Sport Conference in Katowice, Poland. The event gathered the brightest anti-doping minds in the world with one common goal – an optimal anti-doping system which truly has an athlete centred approach and with the overall aim to increase standards across the world with education, prevention and research through the new 2021 World Anti-Doping Code.

However, even though I fully welcome the new increase in international standards within the Code, there is a very long way to go for the anti-doping system to claim it is truly athlete centred. As it stands and, as was widely reported on by the media, WADA’s efforts for athlete-centred reform currently shows little more than ‘lip service’.

Therefore, for the purpose of this blog, I will split it into 3 parts.

The main theme of the speeches was to praise the system being ‘all about the athletes’. This was used numerous times within different speeches. From my perspective, this was very disturbing as the speeches lacked authenticity, but exercised egos, border-lined on the delusional and was defensive when addressing the actual “meat” of athlete representation. It proved to other athletes and I how far out of touch WADA remain with the demands of the athlete community.

For a truly athlete centred anti-doping system, the athletes would get full athlete representation on the WADA Foundation Board with full voting rights, athletes having a right to vote for their next President and Vice President, elected and powerful athlete commissions and consistency in sanctions globally. At the moment, athletes have no right to vote on anything that directly affects them (they have to rely on sports administrators), the Athlete Commissions are not elected (they are picked by WADA themselves) and, as the Russian doping scandal taught us, one stakeholder was given leniency over truly protecting the No.1 stakeholder – the athletes.

However, I would like to congratulate Witold Banka for being officially elected as WADA President and Yang Yang as Vice President. I am hoping they can lead a change of culture within WADA on how athletes are being treated and that they can work with the athlete community to implement full voting rights in their first term. The athlete community is counting on you.

After two and a half years of consultation and hard work, the Athletes Anti-Doping Rights Act – or Anti-Doping Charter as had previously been widely known as – has finally been approved. The Act is a document to ensure that athletes’ anti-doping rights are accessible and can be exercised to make sure anti-doping organisations are held accountable. Huge credit goes to Beckie Scott, Ben Sandford and the rest of the WADA Athlete Commission for working hard over this period and gathering feedback from the athlete community. I truly believe that this document will grow in the future.

However, my question to WADA is why the name was changed from the initial athlete ‘Charter’ to an ‘Act’. In my opinion, an Act represents legislation, but these are athletes’ fundamental rights within the system, aren’t they? Is this another way to diminish the athletes voice and maintain top-down power?

I would also like to take this opportunity to pay tribute to Beckie Scott’s reign as WADA Athlete Chair. Beckie was the voice of reason, spoke for the silent majority and showed unwavering leadership in the face of some of the most challenging circumstances. Above all, she never gave up fighting for athlete rights in anti-doping. The anti-doping system would be better with more Beckie Scotts. She’s the very reason why athletes will never give up. Huge congratulations to Ben Sandford, elected as new WADA Athlete Chair. He may have big boots to fill, but I’m confident he will lead with the very same qualities as Beckie.

Rodchenkov Act – Why I fully support the Act

For people that are not aware, the ‘Rodchenkov Act’ is a new law in the USA which would criminalise international sports drugs fraud and give the authorities more power in prosecuting cheats through normal courts. I feel the fight against doping should be universal and governments should be making doping illegal to protect clean athletes. After all, drastic times call for drastic measures; and we’ve reached that time. Through the harsher sanctions within the legislation, I feel it could lead to increased deterrence for potential cheats. However, I’m concerned and puzzled why there has been such opposition from WADA and the IOC to an ‘Act’ which could transform the fight against doping for the better. This is contradictory to their opening speeches at the Conference, where they asked governments to do more to counter doping in sports. If WADA truly had an optimal anti-doping system which imposed consistent sanctions, then governments would never be forced to take such action. WADA should be encouraging governments to follow suit, not criticising something that will make the fight against doping – WADA’s very fight – easier. Many athletes and sports fans would advocate legislation through governments being positive and proactive and it provides another layer of protection. We can’t let the cheats win; sport is too precious.

I come away from the Conference with a sense of hope that the athlete voice is stronger than ever and I encourage the athlete community to unite and keep fighting for a fit anti-doping system to be proud of. We are on the cusp of something great.