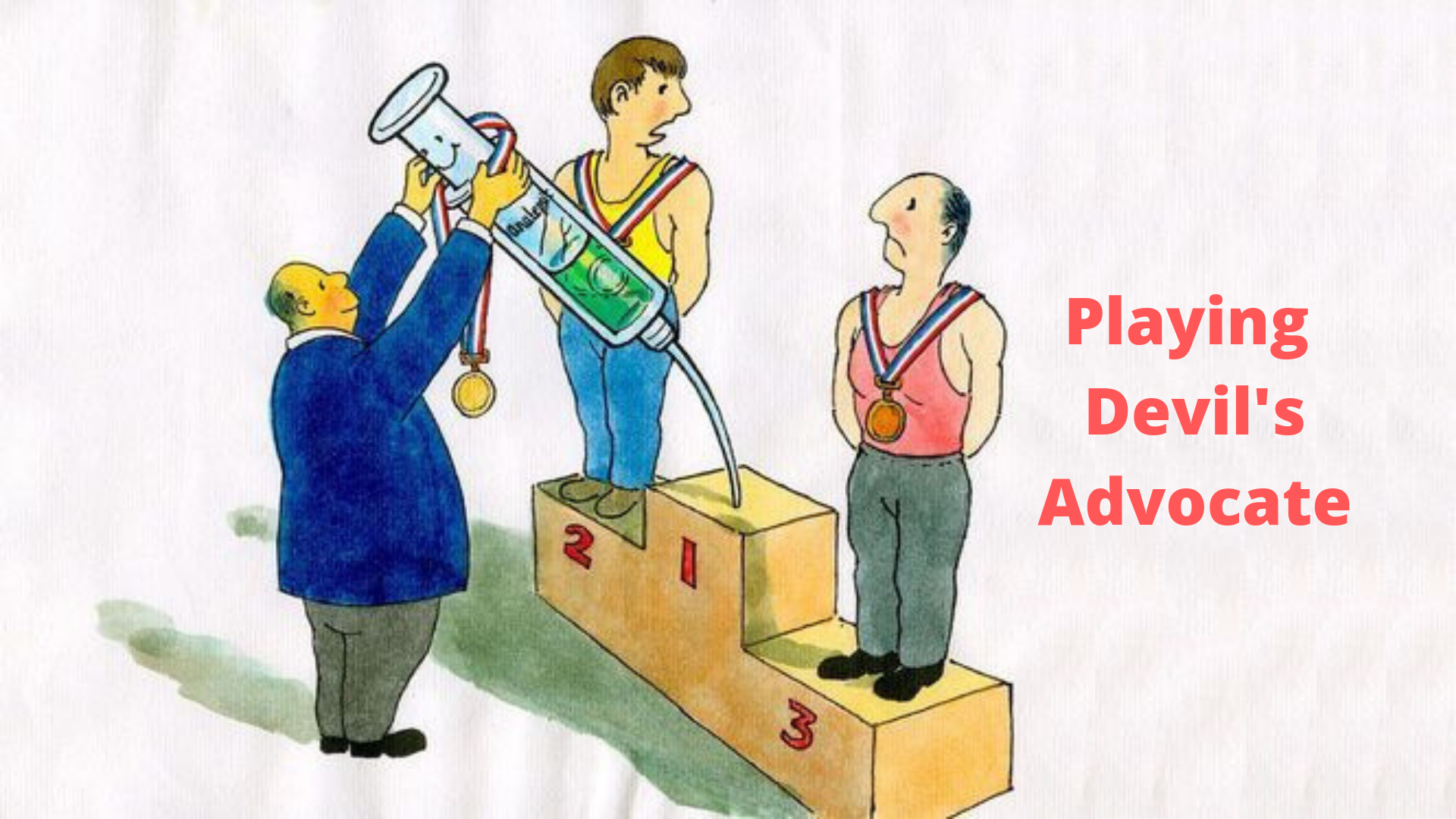 The what: a philosophical journey with Versapak’s Marketing Executive, Dom.

The who: Inspired by a recent post from Anti-Doping Science which explores performance enhancing drugs via Denis Hemphill’s study from 2009

The why: Sport is complex and there are always two sides to every story. Versapak Doping Control prides itself on the integrity of our products and as proponents of a fair debate, we’re exploring this story in the discussion below

“A person who advocates an opposing or unpopular view, often for the sake of the argument”

Dennis Hemphill offers conventional arguments against the use of doping in sport, as well as counter-arguments which explore key philosophical flaws for each – and they are all to be explored below.

1.    Sport should be testing the athletes’ natural abilities

The argument here is that Sport should be testing an athletes natural abilities and that with the help of performance enhancing drugs, these athletes are able to push faster and harder for longer.

Playing devil’s advocate: There are many other strategies that athletes deploy that aren’t inherently natural – things like training in altitude chambers or using equipment/technology that aids in sporting success. Hemphill explores where the line should be drawn, and we could infer that athletes deploy a variety of strategies which may not be deemed as ‘natural’.

Hemphill argued that when an athletes takes performance enhancing drugs (not to be confused with supplements), the playing field is no longer level as natural athletes find themselves at a disadvantage.

Playing devil’s advocate: Hemphill toyed with the notion that there is often a level playing field in the realm of sports outside of drugs, in the sense that there’s uneven access to funding in certain countries, varying levels of coaching (from amateur to world-class) and even access to training facilities.

Thoughts for further debate: This point also made us think of transgender weightlifter, Laurel Hubbard. Previously Owen Hubbard, this Kiwi weightlifter competes in the women’s weightlifting sphere against females born female. As an individual born male (later turned female), this certainly raises questions over a level playing field – considering males typically have a greater o2 (oxygen) capacity over women, as well as the ability for greater muscle growth (hypertrophy). As felt by the Commonwealth Games federation chief executive, David Grevemberg, further discussion is needed within the weightlifting community about the eligibility of transgender competitors.

The longstanding argument that’s used against the taking of PEDs is that they’re seriously damaging for our health. And whilst that is true, Hemphill is at it, playing devil’s advocate, once again!

Playing devil’s advocate: Elite athletes push their bodies to their natural limits and therefore it could be argued that for many of these, their training regimes and diets are probably not ‘healthy’ – think athletes sweating out weight in a sauna to meet a prescribed competition weight! So whilst PEDs are demonised for being unhealthy, so too could be the regimes of athletes – yet why does only the former face scrutiny? (Author’s own thought – not that of Hemphill!)

Hemphill’s final argument is that an athlete using PEDs could potentially coerce others to take drugs out of fear for being less competitive. An example of this could be younger, impressionable athletes at a grass roots level being influenced to start using PEDs because older and influential athletes have taken them.

Playing devil’s advocate: Young athletes may feel ‘coerced’ to conduct unhealthy training or nutritional practises, yet there is no policing on the sharing of this kind of information sharing even though it too is incredibly unhealthy.

This blog has explored both sides to the story of doping with regards to 4 key points and their philosophical counter-arguments. Whilst we don’t condone doping within sport at any level, the world of sport is far from perfect, and it is very interesting indeed, to look at these arguments from a different perspective.

If you’d like to add your thoughts to a discussion that contains some thought-provoking points, feel free to get in touch with us here or alternatively you can reach out to the author of this blog, Dom, here.