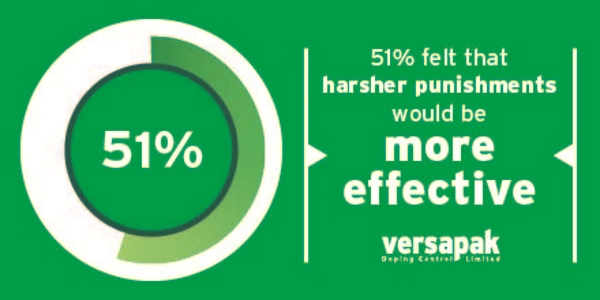 Versapak Doping Control Ltd (Versapak), a global manufacturer and supplier of anti-doping testing equipment, has conducted a survey focused on the value of clean sport and the UK’s perception of the current doping environment within sport. Committed to the promotion and maintenance of clean sport, Versapak conducted the survey in order to gain a better understanding of the public’s knowledge and views of doping and to establish opportunities for further improvements within the industry.

The survey was distributed across the UK to people aged between 13-65+ with an equal gender representation within the sample.

A key theme revealed in the survey was the importance of anti-doping education in the current climate of doping in sport. Whilst respondents felt that increased testing and harsher punishments would help, the survey found over thirty-six per cent of respondents believe that education would be an effective form of prevention against doping, which should begin at secondary school level. This indicates that instilling a belief in the value of sport from a grassroots level could be a vital element in the fight against doping.

Results also concluded that over fifty-six per cent of respondents believe the responsibility of preventing doping within sport lies with individual athletes with forty per cent believing the responsibility lies with sports coaches, further highlighting the need for earlier intervention through education to encourage clean sport.

Another issue identified from the survey is the effectiveness of punishments within doping. Fifty-five per cent of respondents disagreed that enough is being done to discourage doping in sport, compared with just twenty-five per cent who agree. Twenty per cent remained on the fence about this statement.  We did discover that fifty-one per cent of respondents felt that harsher punishments would be an effective way to prevent doping in the future. It is clear from these findings that the general public feel that discipline measures are more needed, to deter athletes from getting involved in doping.

As well as a greater focus on education, sixty per cent of respondents believed that increased testing of athletes could be the most effective way of preventing doping in sport. Versapak’s its brand-new urine transport kit is now available, and has undergone extensive independent testing with the conclusion that it is completely tamper evident. This provides a genuine product for anti-doping organisations and individual athletes across the globe to help restore integrity to the anti-doping industry.

Versapak created the survey in partnership with qriously, an artificial intelligence (AI) embedded platform, which allows for measuring location based public sentiments in real time. Similarly, WADA is looking to AI in its fight against doping to identify suspicious athletes, raise red flags and improve how testing is targeted.

Fabio De Jesus, Business Manager Versapak International, commented: “It has been very interesting and useful discovering how the people perceive doping in sport and the anti-doping industry. The survey has provided us with an insight that will help shape our future initiatives and will hopefully offer valuable information to the rest of the industry.”